Colorado Use Of Force In Arrest Issues – The Illegal Police Use Of A Taser – Stun Gun –  This topic comes up very often in my cases where an arrest has involved the use of a taser – stun gun and the person arrested is outraged that that were “tased” when they had not resisted arrest. 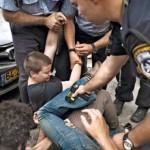 This law defines a stun gub as “a device capable of temporarily immobilizing a person by the infliction of an electrical charge.”

Another law creates a crime – CRS  § 18-12-106.5. Use of stun guns.. Which  provides that “A person commits a class 5 felony if he knowingly and unlawfully uses a stun gun in the commission of a criminal offense.”

In addition – certain of Colorado’s  cities and municipalities may have regulations regarding stun guns.. And other “Conducted Electrical Weapons” these include Boulder, Burlington, Larimer County, Lafayette, Milliken, Parker, Minturn, Pueblo, Eagle and Thornton.

The Watershed Case of  Draper v. Reynolds Sets The Standard For The Police Use of Taser – Stun Guns

Decided in 2004 – the case of Draper v. Reynolds held that – under the “totality of the circumstances”, in that case – the use of the Taser gun did not constitute excessive force, and therefore did not violate the defendant’s constitutional rights at the time of his arrest.

Few cases delve into when and under what circumstances the police are authorized to use a stun gun – taser.

Draper was driving his tractor-trailer on a major highway when he was stopped by a police officer for a license plate violation.  He was – to put it mildly – a jerk to the police officer. Fiorst he sat in his truck with the window rolled up and refused the officer’s commands to exit.

Next he yelled at the officer for shining a flashlight in his face.

Next -after emerging from the truck he ignored the officer’s 5 requests to produce his bill of lading, proof of insurance, and log book.  Instead he berated the officer with a large number angry and nasty statements such as  “How ‘bout you just go ahead and take me to f***ing jail, then man, you know, because I’m not going to kiss your damn ass because you’re a police officer.”

After that barrage of verbal attacks and as the words continued – the officer tased him one time taking him down.

No warning was given prior to the use of the Taser and the arrest of Draper.

Colorado Use Of Force Laws And The Use Of A Taser

§ 18-1-707. Use of physical force in making an arrest or in preventing an escape

(1) Except as provided in subsection (2) of this section, a peace officer is justified in using reasonable and appropriate physical force upon another person when and to the extent that he reasonably believes it necessary:

(a) To effect an arrest or to prevent the escape from custody of an arrested person unless he knows that the arrest is unauthorized; or

(2) A peace officer is justified in using deadly physical force upon another person for a purpose specified in subsection (1) of this section only when he reasonably believes that it is necessary:

(a) To defend himself or a third person from what he reasonably believes to be the use or imminent use of deadly physical force; or

(b) To effect an arrest, or to prevent the escape from custody, of a person whom he reasonably believes:

(I) Has committed or attempted to commit a felony involving the use or threatened use of a deadly weapon; or

(II) Is attempting to escape by the use of a deadly weapon; or

(III) Otherwise indicates, except through a motor vehicle violation, that he is likely to endanger human life or to inflict serious bodily injury to another unless apprehended without delay.

(4) For purposes of this section, a reasonable belief that a person has committed an offense means a reasonable belief in facts or circumstances which if true would in law constitute an offense. If the believed facts or circumstances would not in law constitute an offense, an erroneous though not unreasonable belief that the law is otherwise does not render justifiable the use of force to make an arrest or to prevent an escape from custody. A peace officer who is effecting an arrest pursuant to a warrant is justified in using the physical force prescribed in subsections (1) and (2) of this section unless the warrant is invalid and is known by the officer to be invalid.

Colorado Use Of Force In Arrest Issues – The Illegal Police Use Of A Taser – Stun Gun – What Was The Issue In Draper?

…Was the use of the Taser gun considered  excessive force by constitutional standards in the Draper Case ? What legal standards apply in all Taser Use Cases?

The Draper Court sets out some important standards for the use of a Taser:

“It is well settled that the right to make an arrest necessarily carries with it the right to use some degree of physical coercion or threat thereof to effect it.

[T]he calculus of reasonableness must embody allowance for the fact that police officers are often forced to make split-second judgments-in circumstances that are tense, uncertain, and rapidly evolving-about the amount of force that is necessary in a particular situation.”

The use of the taser in Draper to “effectuate” his arrest of Draper was “ reasonably proportionate to the difficult, tense and uncertain situation that Reynolds faced in this traffic stop, and did not constitute excessive force.”

H. Michael’s Take On The Draper Case And Avoiding Being Tased During A Police Investigation

Be polite – there is justice and then there is “street justice.” If you insist on being a jerk to the guy with the gun and the Taser – be advised – you may be legally tased. My recommendation – be polite and be cooperative without sacrificing your constitutional rights – also turn on your cell phone to record – at least to audio – and record your attempts to be polite before you are tased..

If you are hostile, belligerent, and uncooperative, if you refuse reasonable requests by the police to see documents they are entitled to, if you harass and try to intimidate the officer doing his job, if you use profanity, constantly move around and pace in agitation, and repeatedly yell at the officer – then get ready to be tased or worse.

The police actually believe that ” a verbal arrest command” is not required under circumstances such as in the Draper case.  A verbal arrest command accompanied by attempted physical handcuffing, – in their opinion may actually escalate a tense and difficult situation into a serious physical struggle. Therefore – they believe and the law supports – no warning is necessary and can possibly be counterproductive which may further “jeopardize” not only the safety of the officer but the safety of the person being arrested.

Courts look at three factors in determining if a particular use of force is objectively reasonable.

(1) First – how serious was the offense that the officer suspected at the time the officer was in contact with the individual?

(2) Second, did the suspect pose an active threat to the officer or others?

(3) Third, was the suspect actively resisting or attempting to evade arrest by flight?

These Guidelines Are Helpful and Instructive:

These devices are prohibited from being used:

a. In a punitive or coercive manner.

b. On a handcuffed/secured prisoner, absent overtly assaultive behavior that cannot be reasonably dealt with in any other less intrusive fashion.

c. On any suspect who does not demonstrate their overt intention (1) to use violence or force against the officer or another person or (2) to flee in order to resist/avoid detention or arrest (in cases where officers would pursue on foot).

d. In any environment where an officer knows that a potentially flammable, volatile, or explosive material is present (including but not limited to OC spray with volatile propellant, gasoline, natural gas, or propane).

If you ahave questions about Colorado Use Of Force In Arrest Issues – The Illegal Police Use Of A Taser – Stun Gun, please call our office. The Law Offices of H. Michael Steinberg, in Denver, Colorado, provide criminal defense clients with effective, efficient, intelligent and strong legal advocacy. We can educate you and help you navigate the stressful and complex legal process related to your criminal defense issue.

H. Michael Steinberg, is a Denver, Colorado criminal defense lawyer with over 30 years of day to day courtroom experience –  specializing only in Colorado Criminal Law along the Front Range.  He will provide you with a free initial case consultation to evaluate your legal issues and to answer your questions with an honest assessment of your options.  Remember, it costs NOTHING to discuss your case.  So call now for an immediate free phone consultation.

Helping Clients To Make Informed Decisions In the Defense of Colorado Criminal Cases.