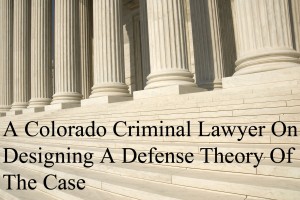 A Colorado Criminal Lawyer On Designing A Defense Theory Of The Case – One of the most important tactics in defending against criminal charges is developing a coherent theory of the case. This “defense theory” serves as the foundation of an organized and aggressive attack on the District Attorney’s case.

Total understanding and command of the facts of a case means memorizing the evidence in the case… the good facts, the bad facts and the facts that have no impact.

Always start with these questions:

Identify the evidence that supports and contradicts each of the elements of the crimes involved. If there is a gap in the defense evidence – assign it a level of importance and decide whether retaining an investigator to explore that gap and seek out additional evidence that may close that gap.

Developing A Theory Of Defense – What Is YOUR Defense?

There are 3 basic approaches to defending a Colorado or any criminal case. The 3 defenses are:

I did NOT do it.. Some one else committed the crime if it was committed at all. Sometimes this defense is based on an alibi or impossibility.

I did it BUT I have a legal (affirmative) defense . Here the Defendant must admit the crime. He or she is caught red handed – or the evidence is overwhelming and the State’s case is very strong. The theory of defense is usually an affirmative defense such as self defense – entrapment, duress, or choice of evils.

I did it but it was NOT AS BAD as they make it out to be.. This is a defense of degree – the wrong crime is charged – others were involved and were much more responsible – you never intended the result – the result was unforeseeable.

Why even create a Defense Theory of the Case? – Creating a Criminal Defense Strategy

One of the key roles of an experienced Colorado criminal lawyer is to help the client see the defense in their case. The development of a case strategy involves a thorough analysis of the facts of the case which must chiefly come from the client. When the facts are understood – the lawyer’s job then is to tell the truth of the case in a way that demonstrates the Defendant’s innocence or – at a minimum a lessened criminal/legal culpability.

The defense theory of the case DRIVES EVERY OTHER PART OF THE DEFENSE.

The Defendant’s theory of the case is critical to organizing your entire case. Also known as the theory of defense – the theory acts as a blue print for the defense attack on the Government’s evidence. To create the theory you must not only master the strengths and weaknesses of the State’s case you must do the same for your defense.

Not every fact in a trial is important. Narrowing down the most critical facts is necessary to not overwhelm the jury with irrelevant evidence. Organize, organize, organize – simplify, simplify, simplify – the evidence and your arguments to select only the evidence you intend to stress during the trial. The defense theory must be clear, consistent and cohesive and it must address not only weaknesses in the State’s case but in your own.

This process is broken down into:

Determining The Key Facts In The Case

(What facts really matter to the case – which can be discarded as irrelevant? Single most important piece of evidence?)

(Why are people testifying as they do  – what are their hidden agendas?)

Determining The Criminal and Evidentiary Law In The Case

(What must you concede has been proven – what has not been proven beyond a reasonable doubt?)

It is fundamental to the defense of all criminal trials to create a jury instruction that the Trial Judge will read to the jury at the end of the trial – just before jury deliberations. This instruction is often overlooked by criminal defense lawyers. The impact of a well written Theory of The Case Instruction cannot be overstated:

While a judge is “not required to tender a theory of the case instruction that embodies incorrect or misleading statements of the law, ” a properly worded instruction must be given as long as there is any evidence in the record to support the instruction. The lawyer must make the instruction unique making certain that it is not covered by the other instructions.

What Then Is A Defense Theory of The Case Instruction?

A theory of the defense instruction should be short, broadly worded, should contain a summary of the laws relied upon, should not contain an “improper emphasis of particular evidence.” and should not contain overly “argumentative matter.” For example a lengthy detailed recitation of the facts in evidence followed by a “general denial of the charges” and a “reassertion” of the Defendant’s innocence will probably be refused.

If a Trial Judge rejects a Defendant’s theory of defense instruction must “work with defense counsel to prepare a properly worded instruction” to the extent of independently drafting one in proper form.

The Defendant, Michael Smith’s theory of the case concerning the charge of menacing in this case is that he is “not guilty” of either of this charge because he was threatened with violence in his own home by the alleged victim in the case – Felipe Gonzales – who menaced Michael Smith within only a few feet of his window for allegedly verbally insulting Felipe Gonzales’s girlfriend – Angelica Miranda.

The Government has not established beyond a reasonable doubt that Michael Smith’s act of obtaining his handgun which was used to ward off this threat by Felipe Cordova and this was a protected act under Colorado’s affirmative defense of self defense.

If you found any information I have provided on this web page article helpful please click my Plus+1 or the Share button below so that others may also find it.

ABOUT THE AUTHOR: H. Michael Steinberg – Email The Author at  [email protected] – A Denver Colorado Criminal Defense Lawyer – or call his office at 303-627-7777 during business hours – or call his cell if you cannot wait and need his immediate assistance – 720-220-2277. Attorney H. Michael Steinberg is passionate about criminal defense. His extensive knowledge and experience of Colorado Criminal Law gives him the edge you need to properly handle your case.

You must make a responsible choice for a Colorado Criminal Defense Lawyer – we encourage you to look at our firm. Over the last 30 plus years – H. Michael has mastered nearly every area of criminal law, procedure and trial and courtroom practice and he is passionate about getting you the best result in your case. He has written and continues to write extensively on Colorado criminal law and he hopes this article – – helps you in some small way. H. Michael hopes you found this page helpful – A Colorado Criminal Lawyer On Designing A Defense Theory Of The Case. 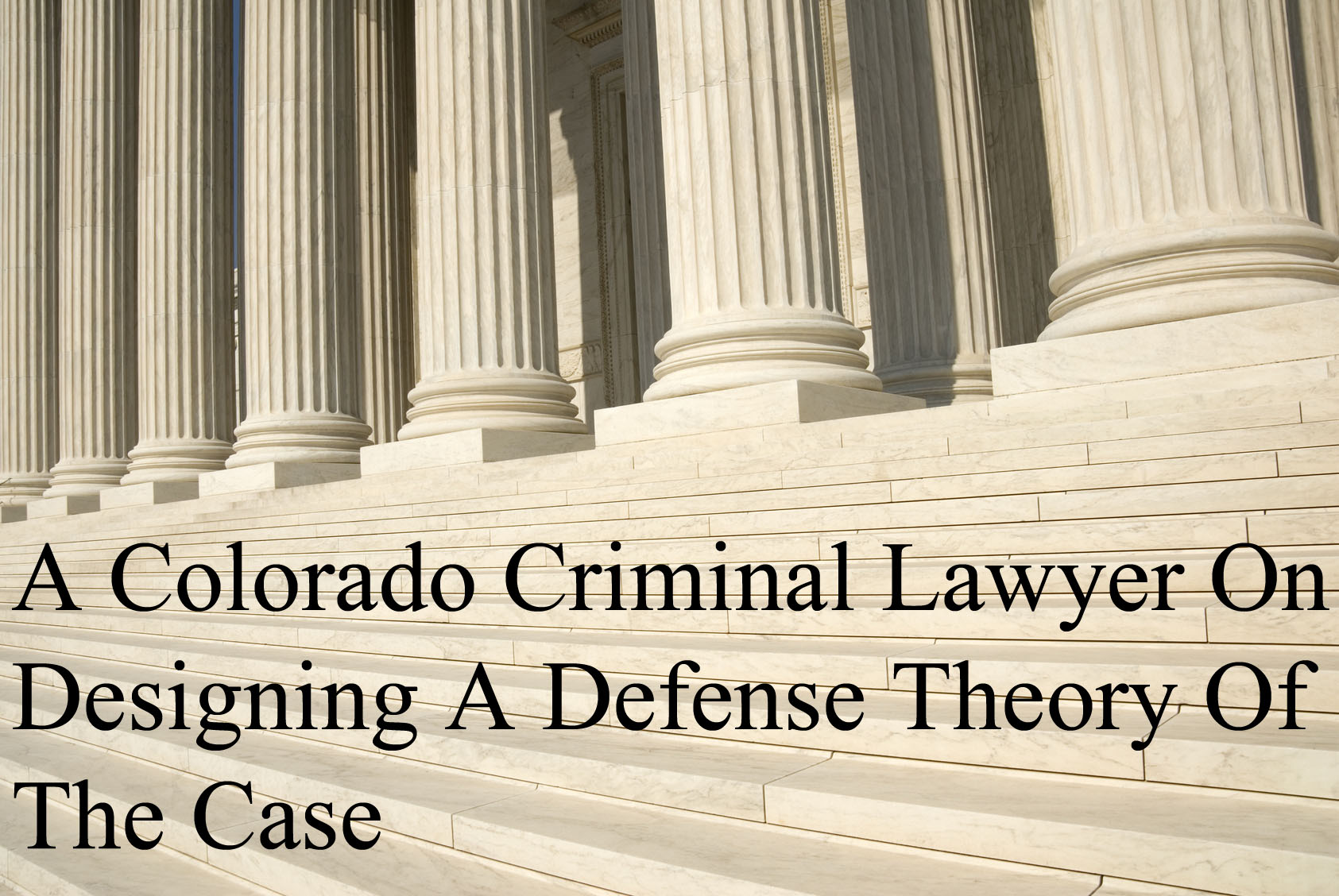 Article Name
A Colorado Criminal Lawyer On Designing A Defense Theory Of The Case
Description
One of the most important tactics in defending against criminal charges is developing a coherent theory of the case. This "defense theory" serves as the foundation of an organized and aggressive attack on the District Attorney’s case.
Author
H. Michael Steinberg