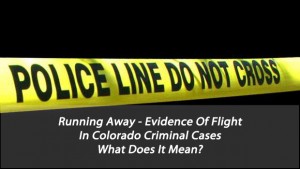 Running Away – Evidence Of Flight In Colorado Criminal Cases – What Does It Mean?

Running Away – Evidence Of Flight In Colorado Criminal Cases – What Does It Mean? Whether a Trial Judge admits evidence of “flight” – that is either fleeing the scene or trying other ways to escape prosecution – the damage to a Defendant’s case can be significant. Importantly this matter is almost totally left to a Trial Judge’s discretion.

While I have written on this subject before – a recent Colorado case has added a more thorought understanding to Colorado Law on the admisssion of “flight” evidence at trial.

Colorado Law On The Admission Of Evidence of Flight At Trial

Colorado Courts of Appeal review a Trial Court’s decision to admit evidence of “flight” under what is called an “abuse of discretion “standard of review. A Trial Court abuses its discretion if the Court’s decision is “manifestly arbitrary, unreasonable, or unfair, or if it misconstrued or misapplied the law.”

A Judge’s decision at trial in this context is almost never reversed on appeal. Which places a great deal of power in the hands of the Trial Judge and makes the work of the criminal defense lawyer at trial even more ciritical at preventing the jury from hearing such evidence – if possible.

What Exactly Is “Flight”

Evidence of flight in trial is almost always relevant because:

Evidence of a defendant’s flight may be relevant to show consciousness of guilt – to  suggests a guilty mind, … and from a guilty mind, guilt itself may be inferred.

Flight means a deliberate attempt to avoid detection and arrest.

….after the charged crime the accused acted in ways apparently calculated to avoid detection, arrest, prosecution, or conviction.

There must be proof offered by the prosecution that the defendant fled and was concealing himself to avoid apprehension.

It cannot be understated that flight – standing alone – does not support a conviction – even when:

What Is The Legal Theory That Permits This Damaging Evidence To Be Admitted At Trial? – “Res Gestae“

Res gestae is a Latin phrase that provides a theory of the admission of this evidence that is founded on the reasoning that flight evidence is not considered evidence of other offenses or acts that are extrinsic to the offense charged, but rather, it is considered part of the criminal episode or transaction with which the Defendant is charged.

Res gestae evidence is viewed as so linked in time and circumstances to the charged crime that:

it forms an integral and natural part of an account of a crime, or it may be admitted as evidence in a trial because a trial Judge has found it necessary to complete the story of the crime for the jury.

Res gestae evidence includes evidence of a Defendant’s behavior which may also admit into evidence threats against witnesses or non-witnesses – again the argument is that this evidence should be  admissible to show that a Defendant was conscious of his or her guilt and therefore committed the crime charged.

A Defendant’s actions to avoid an arrest is offered – under this theory of evidence – to show the kind of “guilty knowledge” that is considered part and parcel of the total picture surrounding the offense.

The Colorado Sequence For Admitting Evidence of Concealment, Flight, and Avoidance of Arrest to Show Consciousness of Guilt

A Colorado Trial Judge runs through an analytical sequence of rules of evidence to determine if the Court will admit controversial evidence such as evidence of flight.

Question 1: Is It Relevant?

Relevant evidence is evidence “having any tendency to make the existence of any fact that is of consequence to the determination of the action more probable or less probable than it would be without the evidence.” CRE 401.

The test of relevancy is whether it renders the claimed inference more probable than it would be without the evidence.

Question 2: If It Is Relevant, Is the Probative Value of the Evidence Substantially Outweighed by the Danger of Unfair Prejudice?

If evidence is logically relevant to a consequential fact, the Trial Court must then determine whether, under CRE 403, the probative value of the evidence is substantially outweighed by the danger of unfair prejudice.

In reaching its decision, the trial court must determine whether and how the evidence at issue is relevant to the case and, if so, to what extent its probative value might be outweighed by any unfair prejudice to the defendant.

According to this test, it does not matter that other inferences may be equally probable; it is for the jury to determine what motivated the behavior.

Flight evidence is dangerous and destructive to the defense of a Colorado criminal case – it must be carefully analyzed – and if possible – excluded from trial.

Running Away – Evidence Of Flight In Colorado Criminal Cases – What Does It Mean?

The reader is admonished that Colorado criminal law, like criminal law in every state and at the Federal level, changes constantly. The article appearing above was accurate at the time it was drafted but it cannot account for changes occurring after it was uploaded.

Never stop fighting – never stop believing in yourself and your right to due process of law. You will not be alone in court, H. Michael at your side every step of the way – advocating for justice and the best possible result in your case.

ABOUT THE AUTHOR: H. Michael Steinberg – Email The Author at hmsteinberg@hotmail.com – A Denver Colorado Criminal Defense Lawyer – or call his office at 303-627-7777 during business hours – or call his cell if you cannot wait and need his immediate assistance – 720-220-2277. Attorney H. Michael Steinberg is passionate about criminal defense. His extensive knowledge and experience of Colorado Criminal Law gives him the edge you need to properly handle your case.

You should be careful to make a responsible choice in selecting a Colorado Criminal Defense Lawyer – and we encourage you to “vet” our firm. Over the last 30 plus years – by focusing ONLY on Colorado criminal law – H. Michael has had the necessary time to commit to the task of constantly updating himself on nearly every area of criminal law, to include Colorado criminal law and procedure and trial and courtroom practice. H. Michael works hard to get his clients the best possible results in and out of the courtroom. He has written, and continues to write, extensively on Colorado criminal law and he hopes this article helps you in some small way – Running Away – Evidence Of Flight In Colorado Criminal Cases – What Does It Mean? 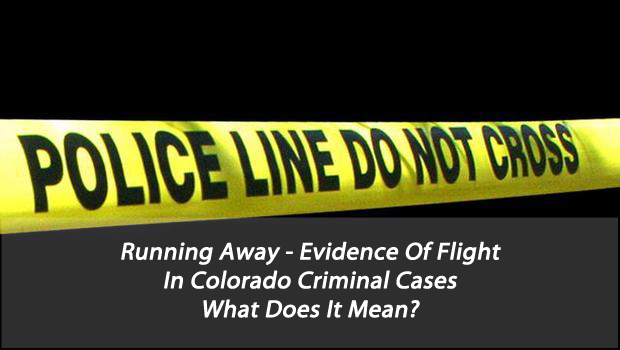 Article Name
Running Away - Evidence Of Flight In Colorado Criminal Cases - What Does It Mean?
Description
Whether a Trial Judge admits evidence of "flight" - that is either fleeing the scene or trying other ways to escape prosecution - the damage to a Defendant’s case can be significant. Importantly this important matter is almost totally left to a Trial Judge’s discretion.
Author
H. Michael Steinberg